How To Do Tourism to the Whitsunday Islands You Know 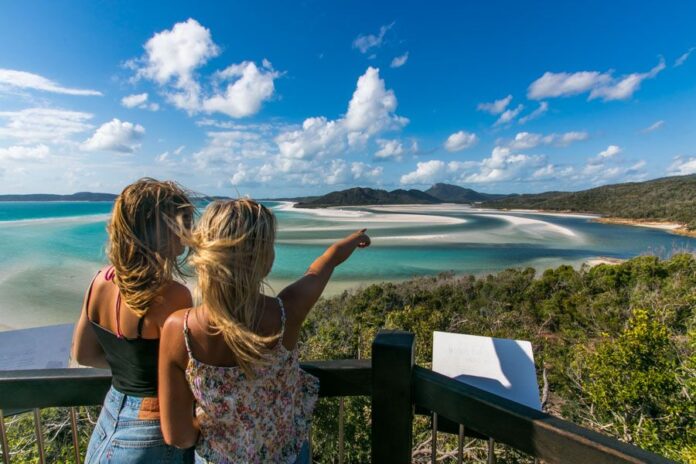 There was no time to be hung over, so we quickly showered, packed our bags (and goon) and skedaddled to the marina in order to jump onto the Waltzing Matilda to sail the Whitsundays. A quick briefing on safety and we were sailing off into the infamous island cluster. The Whitsundays are one of the most popular sailing destinations in the southern hemisphere, located 900 k north of Brisbane they seem to be a hotspot for everyone from backpackers to those looking to charter million dollar yachts, which was ideal for scouting out my future husband.

Our first stop was the postcard view of the Whitehaven Beach. However, with less than ideal conditions, the journey would be a true test of our seaworthy legs and stomachs. While Danni and I faired the trip, others weren’t as lucky and couldn’t get off the boat fast enough. As we disembarked, the clouds parted and the winds calmed almost as if writing its name for itself (although it was originally named after a coal mining village in the UK, Whitehaven). While the picture perfect background looks ideal for taking a dip and cooling off, unfortunately you must first put on an unsightly stinger suit. It’s the first beach I’ve been in whose waters are flat out deadly due to the stingers that murk below. The jellyfish aren’t the annoying little stingers found in the southern parts of Australia, but the die mofo die type of jellyfish. The type of jellyfish that boat requires you to sign wavers before you go in the water. However, to put it in perspective only two people died from jellyfish stings last year. After spending three hours enjoying the pristine waters, catching a few glimpses of sting rays and reef sharks, and making enough awkward modeling shots (because after a while smiling in pics just gets boring) we headed back to the boat.

A dingy ride back to the boat and we were off sailing again to where we would spend the night. A calm respite from choppy open waters Nara Inlet was the perfect place to enjoy our BBQ dinner and a few glasses of goon. With such a beautiful starry night, Dani and I decided we were better off sleeping under the stars than in our four share cabin, so we grabbed our pillows and blankets and headed up to the deck to spend a night amongst the fresh air. It was great until about 1 am, when we realized that our backs reminded us that were not 10 years old anymore, so we headed back down to our bunks before waking up for sunrise a few hours later.

Once we had some coffee pumping through our veins, we were off to snorkel the Great Barrier Reef. While my real dream has always been to dive the reef, this was a great introduction and did not disappoint. We had the spot to ourselves, the reef was brimming with coral and I even managed to find Nemo a few times.

After lunch, the sailing continued only this time, we were not only the passengers but the crew. Dani and I were lucky enough to be able to navigate the ship, while the boys were in charge of hoisting the masts, it was the perfect end to a trip around the Whitsundays.