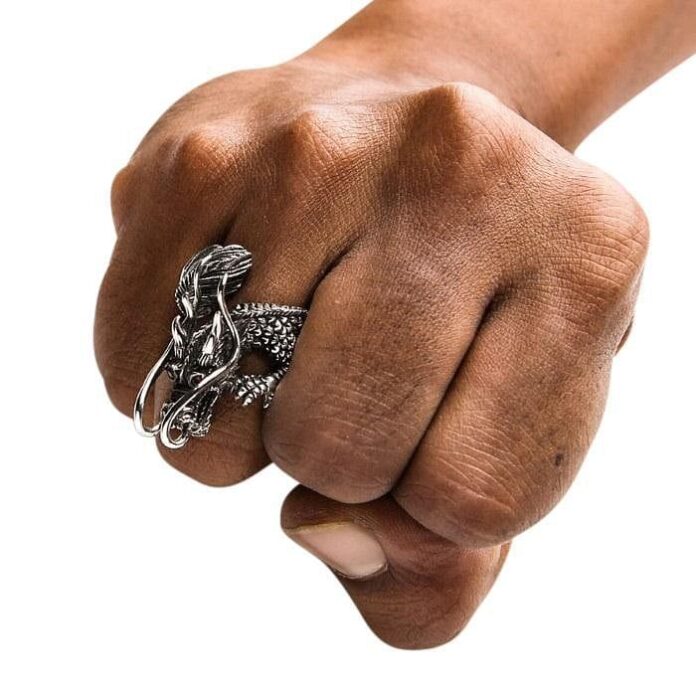 Myths and legends from around the world tell about creatures that fancy gold and jewels. They guard their treasures so zealously that often ignore the real danger – a hero who comes to slay them. This connoisseur of jewelry is none other than the dragon. If you yourself are a connoisseur of both jewelry and flying serpents, you can combine both of your penchants in a dragon ring.

Myths and Legends about Dragons

The word ‘dragon’ comes from the ancient Greek ‘drakwn’ standing for a fabulous creature resembling a snake. Although the word has Greek origins, the images and stories about serpent-like creatures are found in every corner of the world.

The dragon was known to Sumerians, Egyptians, Indians, Chinese, and Greeks. The beast was revered as a symbol that united the earthly and heavenly. At the same time, its appearance and atrocious actions instilled fear. This terrible beast used to kidnap beautiful women and take them to his underwater kingdom. These legends are based on the tradition to sacrifice the most beautiful woman in a village to please the spirit of the water. Specifically, these traditions were common in China, ancient Egypt, and among the Mayans. On the appointed day, a woman was dressed in her best clothes and pushed into the river. The Egyptians, in particular, believed that this sacrifice ensured the flooding of the Nile, which made the soil more fertile.

Another common plot tells about a dragon-slayer hero. The most prominent name that went down in history was that of St. George. The hero defeats not just a terrible beast, but an idolater. Therefore, as it were, his feat personifies the struggle against paganism.

In Germanic myths, the dragon is an avaricious keeper of countless treasures. For 300 years, he was hiding in a cave along with his wealth. When a runaway slave steals a golden goblet from his collection, the dragon goes berserk and tries to find the robber. He destroyed everything on his way until a hero stabs him with his sword.

While the reputation of the dragon is less-than-perfect in the West, it is a creature of great esteem and worship in the East. In the countries of East Asia, the mighty serpent is a symbol of happiness and eternal life. On top of that, he personifies Yang, the masculine principle. Dragon images used to embellish the clothes of renowned Chinese generals. However, only the emperor himself could have body ornaments representing all nine dragons.

The Significance of Dragon Rings

The dragon is the only creature that has mastered all 4 elements. He can walk on the ground, fly in the sky, spew fire, and swim in the water. This mythical beast can be kind and generous. At the same time, he is terrible in anger. Deadly spikes and claws and fire coming from his mouth will not spare anyone. The dragon was often depicted on banners and military insignia as a personification of strength, bravery, and fearlessness.

Dragons are often associated with the primordial energy of the world. They personify chaos, the uncontrollable nature of existing, and simultaneously – the desire to subdue it.

Ancient treatises described dragons in much detail. The beast had the claws of an eagle, deer horns, a lush mane, and the head of a camel with a bulge at the nape. The back of the creature was covered with fish-like scales, and the number of scales was strictly defined – 81 or 117. In modern jewelry, the appearance of dragons is more diverse, although many of his features came straight from the past. The mythical beast is depicted coiled into a ring or a semicircle, clasping a thunder ball or holding a pearl, sleeping or ready to attack.

Who is the Best Candidate for a Dragon Ring?

Dragon rings are versatile and suitable for any gender, although their energy is most compatible with that of males. If you are picking a dragon ring as a gift to your friend or loved one, the best candidates are:

Dragon jewelry given as a gift is a wish for wisdom, well-being, endurance, and quick wits. Make sure that your gift is made of noble materials because, as you have already learned, dragons love treasures. A 925 silver dragon ring is perhaps your best bet since it is affordable, precious, and attention-grabbing.

How to Wear Dragon Rings?

A dragon ring should attract as much attention as possible since it is the source of its power. Therefore, choose a dominant hand for your bauble. That being said, you shouldn’t put it on the ring finger of the left hand. It is due to its alleged connection to the heart, and when the dragon is too close to one’s heart, it may weaken its owner and subjugate them to his power.

Rings made of natural materials can act as your personal talisman. However, you should first activate their powers with a special ritual. Unlike fashion rings, it’s best to hide your dragon from prying eyes. You should either turn it toward your palm or hang it on a necklace and wear it as a pendant.

Why is it Best for Women to Wear Sandals at the Beach?

How to Buy the Best Pair of Work Boots