What Is Innovation Adoption Curve By Rogers You Need Know 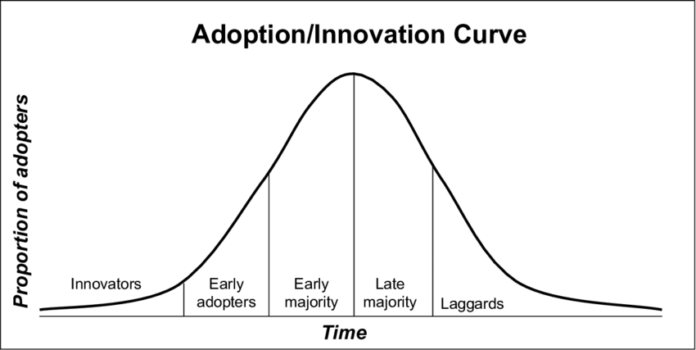 Roger in 1962 published a book called ‘Diffusion of Innovations’ in which he explained a theory of innovation adoption curve. According to this theory, the adopters are categorized into groups according to the way they react to adoption. There is a process by which the innovation is communicated among the people and organization which is known as diffusion. The innovation that is to adopted spreads through various communication channels.  People are classified in five groups. They are:

These individuals try new ideas in a careful manner. They are second fastest to adopt new innovations. They are usually younger in age and have higher social status.

The individuals in this category are thoughtful people who adopt the innovations earlier than the majority of people. The time of adoption for them is longer than innovators and early adopters and has above average social status.

These are the skeptical people that adopt the innovation after a lot of people in the society have adopted the innovation. 34% of the population belongs to this category. They have below average social status. They are in contact with only the late and early majority people.

They are the last to adopt an innovation. They just concentrate on traditions, have lowest social status and are in contact with only their friends and family. 16% of the population constitutes laggards.

The characteristics of adopters are important because: