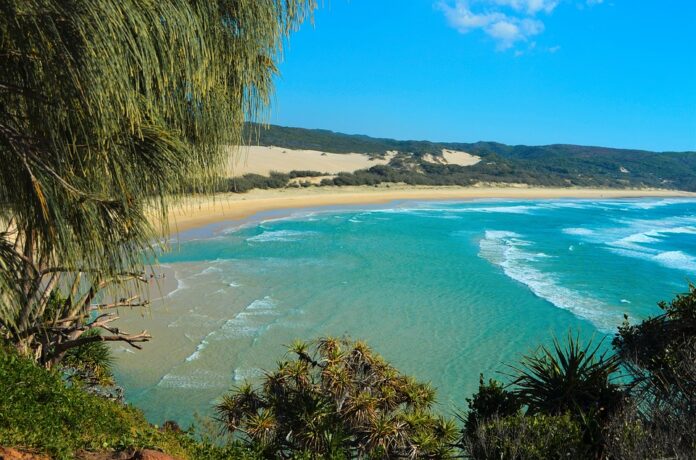 Sometimes I can’t decide if it’s the people or the location that makes a trip memorable, but when I embarked on my trip to Fraser Island, I was lucky enough to have an island oasis coupled with a group of people that made the experience unforgettable.

Fraser Island was one of those places I had never actually heard of until I got to Australia, but as soon as I got here I hadn’t met a single backpacker that hadn’t already been or had intentions to go. So I figured with it being just a few hour drive from Noosa, it was about time I jumped out of the Noosa bubble, and headed north.

Kamari, meaning paradise, as the natives refer to Fraser Island is the world’s largest sand island at a 120 kilometers long making it a jungle gym for 4WD cars with no proper roads and beaches that are used as highways; no sunbathing on the roads here.

With our convoy of 3 Four Runners, 15 of us headed out to explore the island with our guide, Paul. We all quickly started picking up French with ‘bouget ton cull’ becoming the slogan for our trip, which translates to ‘move your ass’ in English. It became quite useful when the cars broke down every time we went through water.

Lake Webby was our first destination, fed by a spring water stream that was blocked by sand dunes, it was the perfect retreat from the sun scorched sand dunes surrounding it, but, before we knew it, the sun was setting and we were back at camp for the night.

A life-size Janna game coupled with the infamous goon (Australian boxed wine) made for a night of debauchery, only to be awoken again at 6 am to start our next day’s adventure.

Our first stop began at the Mahanoy shipwreck, followed by a morning dip at the champagne pools, rightfully named due to the bubbling overflow of the ocean into these ponds. Our next destination brought us to Indian Head, which juts into the water making it a perfect spot for whale watching, although it got its name due to a massacre killing hundreds of aboriginals during the takeover of the island. We ended our day floating down Eli creek, which was perfect for bathing our smelly sand blown bodies. and a landing strip for airplanes as well
The Mahanoy shipwreck which happens to be on the landing strip for airplanes as well

We ended our trip at Lake McKenzie, a perched lake known for its white silica sand beaches and coral blue waters. It’s the Kodak moment of Fraser Island that graces the front of every brochure and was the perfect way to end the trip.