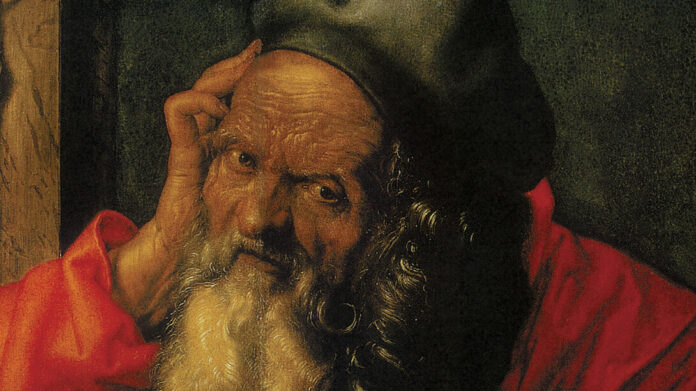 Painter Albrecht Durer was widely known for his interest in prints and graphics style. His paintings focused on perception, perspective, and proportions while representing a man in his natural form.

There are numerous facts about Albrecht Durer’s extraordinary talents, which claim him as a self-assured artist. He was never bothered by his contemporaries and always progressed with his qualities. The artist’s central motif was to beat him in his own game.

He mastered a legacy shared by none and created a chain of artworks that was unique to him. First, learn more about the artist’s achievements and famous paintings. Then, explore some more interesting facts about Albrecht Durer through some of his classic creations mentioned below.

The Four Horsemen of the Apocalypse

One of the finest Albrecht Durer drawings is the Four Horsemen of the Apocalypse. It is a collection of fifteen scenes from the Book of Revelations. As described in the testament, the painting shows four Apocalyptic riders, and in their surroundings lies famine, war, plague, and adversity.

The painting seems more dramatic because an angel oversees the scene. In addition, there are dramatic clouds and rays of light in the backdrop. The artist gives attention to detail, and everything on the canvas is sharply painted.

The four horsemen are riding next to each other but are shown in a manner as if they are overlapping one another. Finally, death is personified monstrously, where it swallows a man wearing a bishop’s crown and miter.

A 16th-century depiction like this is devastating because of the Apocalypse and the mindset of the society. However, Durer significantly captured the panic and chaos of the end times with his ideas of precise details in such an environment.

Adam and Eve (The Fall of Man)

According to Christian mythology, Adam and Eve were the first two humans to begin the tree of life. In Adam and Eve (the Fall of Man), the characters are portrayed as classical nudes and posing similarly to the Greco-Roman artists and architects of the time.

The wild foliage behind Adam and Eve shows a resemblance to German forests. This painting has been very controversial to painter Albrecht Durer life story as it covers a subject and a narrative different from others.

The master ironically uses the Biblical story of the fall of ‘man.’ It depicts every human aspect, from failure to expulsion, and everything in between, just to illustrate the philosophical successes and ideals of human beings.

Self Portrait With Fur Trimmed Robe

In this self-portrait set on a plain background, Albrecht Durer’s artist looks straight into the eyes of its viewers. With two fingers spread apart, his hand is lifted towards his chest. It is reminiscent of a blessing gesture because the portrait overall looks like a depiction of Jesus Christ.

The curly hair is falling to his shoulders, and his monogram is prominently seen on his right. The painting gathered a lot of fame and was termed the “Apocalyptic work of the year.”

In the Renaissance era, the core idea behind portraits was to show the sitter in a three-quarter view. It appeared almost real, and the entire theme was set within a realistic background. The wittiness of the artist choosing the frontal view and a dark, nondescript backdrop became highly successful in evoking religious images.

Durer was highly concerned with his public image and adapted the style of painting self-portraits into his works. The painting was made in 1500 and was sold or given by Dürer to the City Council of Nuremberg. It was kept on public display until the early 19th century. 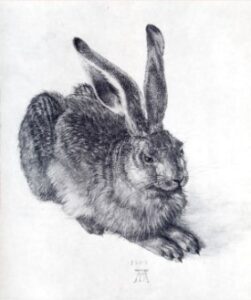 Young Hare is a unique description of Albrecht’s drawings as it entails a case study of a mouse. Other than having a scientific influence on this portrait, it is a blend of a mouse’s accurate, sensitive, and natural features.

A hare is shown in a three-quarter view. The hind legs of the mouse are folded underneath its body, whereas the front legs are slightly extended in the forward direction. Although the painting title is Young Hare, the animal seen in the artwork is a mature wild hare.

However, it is not simply a scientific study of an animal. Instead, the work conceptualizes an inherent tension created by the contrast between the subject and its depiction. For example, the hare is a notoriously restless animal that flees when approached too closely.

The prolific abilities of the artist to capture the hare in a fleeting moment of stillness is praiseworthy. The slight turn of its ear and an eye fixing the viewer indicates that the animal keenly notices us. But, on the contrary, his hind legs are bent and ready to jump.

The follow-up mentioned above was all about Albrecht Durer’s artist and his prolific paintings. Renaissance art is a priceless possession today, and you can find his oil on canvas replicas online. Many websites sell Alberta Durer paintings and promise doorstep delivery within no time.